Can Science and Engineering Change Sanitation in India?

This was originally published at Scientific American

Just a few weeks ago, I flew into India to join other new media specialists and journalists with the International Reporting Project to examine issues of child survival and health. (Before I continue, I simply must extend thanks to the Bill and Melinda Gates Foundation for providing a portion of the IRP funding to make this trip possible, the School of Integrative Biology at UIUC for supporting my participation in the project and GoPro Cameras for outfitting me with a Hero3 for documentation purposes.)

I have talked to many many people who have experienced India, I’ve read numerous books (fiction and non-fiction), and watched many documentaries, TV shows, and fictional movies about India, but knew that the experience of visiting would be something valuable. I was warned of the approximately “five people per square foot” population density in Mumbai, of the smell–a persistent sewer/trash odor, the pollution, the noise, the dogs, cattle, and goats, and the widespread extreme poverty. I discovered that the southern port city of India in Maharashtra State where we first landed, formerly known as Bombay, to be all that and even more. It was humid and warm during our visit, but actually in a relatively cool and dry streak, at least for India. The city, as I was exaggeratively informed by John Schidlovsky, founder and director of the IRP, “was built on mold” and with my allergy to mold so severe that I carry an epipen, I found myself taking more than the recommended dose of allergy meds just to breathe, each day grateful it wasn’t the rainy season. Thankfully, we eventually traveled north to cooler, drier, and less moldy climes to a rural area outside Nagpur and later to New Delhi.

Throughout most of India, I found myself delighted at the fact that women still wear colorful sarees on a daily basis, not yet succumbing to western trends, and impressed that men and boys generally wear button-down shirts, slacks, and nice shoes everyday, no matter their income level or age (try convincing a young boy to do that in America day to day–no way!)

If you have seen the movie “Slumdog Millionaire”, it begins in Mumbai, in one of the largest slums located near the airport and situated right at the largest dumping ground in India. This area was our first stop in order to visit the Niramaya project drop-in health center. We toured the slums and received an overview of healthcare and educational awareness work Niramaya does in the community.

Many sights, sounds, and smells impacted, and even impressed me, but nothing I encountered really surprised me as I realized that poverty is poverty everywhere and people in India are just trying to live their lives as they go about their day, as anywhere else. Despite this acceptance of the state of living of slum dwellers, as someone who has an immense appreciation for modern plumbing, and armed with a good working knowledge about micro-organisms, I found myself uneasy at the thought of open defecation as practiced so widely in India.

<–A scene in a Mumbai slum. While many journalists took photos of people, I was uncomfortable invading their space.

An entire nation drowning in its own excreta is an unpleasant thought, but this is what is happening, at least according to Sunita Narain, Indian environmentalist and Director General of the Centre for Science and Environment, author of “Excreta Matters“, “India’s first and most comprehensive survey …on the state of its water and its management”, in a comment piece published on June 14 in Nature.

Open defecation is practiced by more than 600 million Indians, according to theWorld Health Organization. The WHO calls open defecation the riskiest sanitation practice of all due to the ease of disease spread. More often than not, water is contaminated by the same people who drink it. Open defecation is rampant in slums and rural areas because alternatives simply don’t exist as pit toilets and flush or pour toilets are found primarily in urban areas. In the slums and rural areas, there might be public toilet areas, however, due to long lines and privacy concerns, many residents still wait until nightfall to go –increasing the risk of related violence, especially against women and girls. Open defecation and ill-maintained sewage and septic systems leak pathogen-laden contaminates into surrounding rivers and lakes, leading to disease outbreaks of waterborne pathogens and contributing to early mortality and is a major contributor to malnutrition due to chronic diarrhea and possibly improper absorption of nutrients due to an imbalance of intestinal microflora from consuming pathogen-laden water and food in a condition/syndrome called “environmental enteropathy“. Infants and children under five years old are particularly susceptible to diarrheal diseases. 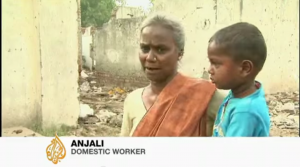 <–Al Jazeera reported on India’s “Sanitation Emergency” last summer. This video highlights the pertinent numbers and issues surrounding this crisis and includes the stunning statistic that more Indians have access to mobile phones than to toilets. Click HERE to view the video.

Before I left for India, I researched the issues that plague India’s children. Diarrhea and malnutrition are the largest killers of children under the age of five worldwide and is particularly pronounced in certain areas of India. Around 1,000 children below the age of five die every day in India from diarrhea, hepatitis-causing pathogens, and other sanitation-related diseases, according to the report of United Nations Children’s Fund. Microbial sources of these diseases can be protozoan (amoebosis), parasitic (schistosomiasis) viral (hepatits A) or bacterial (typhoid, dysentery, cholera).

<–Three puppies resting in the shade cast by 50 gallon water drums, oblivious to the overwhelming odor of the chlorine tablets used for disinfection. These drums are filled with clean water shipped in by tanker trucks since no running water is available in the slums.

In my quest to learn more about the role of sanitation in disease control, I contacted Scott Huler, author of On the Grid: A Plot of Land, An Average Neighborhood, and the Systems that Make Our World Work

, a book about modern necessities such as clean water, toilets and sewer systems we take for granted through most of the western world. He reminded me of an interesting bit of information, quoted here from a recent blog post of his:

“… in 2007 the British Medical Journal asked its readers to name the most important medical milestone since 1840, they chose modern sanitation — which defeated things like, say, antibiotics or anesthesia or vaccines. And yet 2.5 billion people still don’t have it.”

This is pretty incredible. Our knowledge of how drinking water must remain separate from wastewater has improved our health by leaps and bounds as a species/society. Understanding that waterborne micro-organisms cause disease and that hygienic measures can prevent illness is undoubtedly critical. In addition to that important BMJ survey, Scott pointed me to a book about toilets and sanitation worldwide by Rose George called The Big Necessity: The Unmentionable World of Human Waste and Why It Matters

Slate published excerpts back in 2008 which you can reference for a preview. Relevant to the topic of this article, I recommend this particular excerpt, Latrine Rights in India.

If you prefer your information in video form, Rose George gave a succinct and enlightening talk about the world of “crap” for TED in February and it was released last week. She highlights the issues facing girls and women in particular in India, fearing for their safety in public latrines and at schools.

So then, what is to be done, from a science and engineering perspective? Sunita Narain explains from her article in Nature:

“The challenge for science is to look beyond the modern engineering mindset. We know that current technologies, which use large amounts of clean water to transport small amounts of excreta through expensive pipes to costly treatment plants, are unworkable and unaffordable in much of the world. Yet toilets and sewage disposal are among the least researched technologies. New technologies and new thinking are urgently needed for use across diverse ecosystems. Open drains might become planted waterways, with the vegetation cleansing the water. Or microbes might be used to decompose and de-pathogenize effluent. Sewage must be treated as a resource — turned into water for drinking, irrigation or industry.”

I’ll add to this broad thought that the agencies that are educating the people of India (most importantly the women) must continue to spread the word on how important good hygiene is to preventing deadly and debilitating diseases. I saw many examples of this while there through NGOs, physicians and other advocacy groups. So many people lack the understanding about the spread of disease and how simple it is to create a healthier community and nation.

A Visit to an India Full of Science and Engineering Read Science! Episode 2: “We Love Dinos!” Edition