At the #NASAtweetup for the Last Shuttle Launch

I originally posted this article at Scientific American on July 13, 2011.

The above Pecha Kucha talk was presented at the Staerkel Planetarium in November 2011.

Imagine a dark haired little girl of not quite four years old, playing outside in a cotton dress in the warm dusk of July 30, 1969, in Albuquerque, New Mexico. 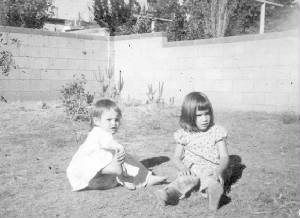 Me and my little sister, Geri, in New Mexico, where I recall being called in to witness man’s first steps on the moon. Photo: Joanne Manaster

Mom comes out and yells “Do you want to see men walk on the moon?!”

“Yes!” I would have probably hurrahed as I remember feeling a rush of excitement and ran in to see. My parents had bought a color TV a few days before the moon landing just for the event, so I knew it was something special.

Perhaps I looked up at the not quite half full moon that night as I went inside and wondered if the men would fall off. How did they stay up there? How did they really get there?

This captured my young mind, and it is one of my first memories. Maybe I already knew I was interested in science, or maybe this began it all, who knows? Sending not just rockets, but human beings, into space seemed to be incredible and perhaps this thought sparked my interest in space and a desire to be an astronomer, at least through 5th grade.

My imagination was again captivated toward space travel several years later by an enthusiastic teacher who told of how they were building a rocket that could return to the earth just like a plane. I recall being incredibly impressed, even at that middle school age, that humans were so ingenious. I kept this curiosity in mind as news of the shuttle program would be released every now and again. I followed closely as the prototypes were tested and eventually the first launch arrived (Colombia) when I was in high school. The retracted service portion of the launch pad is shown off to the left in this photo. As part of the NASA tweetup, we were treated to a view only 600 meters away as this occurred. This was less than two hours after lightning was reported to have struck the launch pad during a violent storm that had us confined to our tweetup tent. July 7, 2011, Shuttle Atlantis. Photo: Joanne Manaster

I find myself still in awe of the feat we have accomplished over the past 30 years of the shuttle program. I am completely impressed by how NASA scientists and engineers designed a rocket to meet the needs of increased back and forth transport of astronauts and have improved their design in response to needs or flaws, some unfortunately in response to tragedy. Even though shuttle launches had become commonplace, I remain interested in developments in the program.

Out of 5,500 NASA twitter-following applicants for 150 spots, I was fortunate enough to be chosen to watch the shuttle launch from the press site (three miles from the launch site) and to hear from big names in NASA and meet astronauts and mingle with others who were also in the same fortunate position.

There are a good number of blog posts explaining the events and people and reactions of the two day tweetup and a simple twitter search for #NASAtweetup will point the way to those. I share in this post a few photos taken with my iPhone, which, compared to the elaborate photographic equipment many had, made me experience a bit of camera envy and left me wishing I knew how to take photos of things other than cellular ultrastructure. On the day of the launch (July 8, 2011), the Astrovan carries the four astronauts to the shuttle several hours ahead of time. STS-135 Atlantis is crewed by four astronauts: commander Chris Ferguson, pilot Doug Hurley, and mission specialists Sandy Magnus and Rex Walheim. Photo: Joanne Manaster

At least four former and current astronauts (but not the ones currently on the mission) stopped by to speak with us. Mike Massimino and Doug Wheeler even shared the stage with Elmo, the enthusiastic, red muppet youngster from the kid’s TV program Sesame Street. It was heart warming to hear that Elmo had a keen interest in becoming an astronaut and understood the importance of knowing Science, Technology, Engineering and Math (STEM), as was pointed out as absolutely essential by the two astronauts with him. Of course, Elmo, being only 3 ½, had difficulties counting down backwards from 10, so I think he has a ways to go yet.

Astronauts Mike Massimino and Doug Wheeler share the stage with Elmo to discuss space travel and what it takes to be a well-trained astronaut. July 7, 2011 Photo: Joanne Manaster.

NASA treated us tweeters right while down in Florida. We were housed during the day in a large air-conditioned tent, with Wifi and electrical outlets right at the press site. It kept us safe and dry while a torrential storm raged with lightning that struck the launch pad. The inclement weather diminished the chances for a successful launch the next day, but we all held out hope it would not be scrubbed.

While I could not possibly tweet every topic or interesting phrase that was spoken those two days, here are a few highlights from my twitter timeline (I’m @sciencegoddess):

“Future of space program fuzzy. I’m not happy about being dependent on Russians for manned travel.” Crippen on future of NASA #nasatweetup

NASA is not ending. There is still much science to be done! #nasatweetup (Lori Garver, NASA’s deputy administrator)

Much discussion by our speakers was about biology, (as well as physics and engineering) being done in space. Another central topic was the importance of STEM education. Astronauts are the ultimate and most visible STEM ambassadors. I’m glad there will still be human space travel, to continue on this tradition, even if our American astronauts must leave from Kazakhstan, at least for a few years.

As the space program has evolved and the way we traveled to space has changed, it seems that astronauts have changed, too. They will always still need to be meticulous and exacting, and able to think on their feet while remaining cool under pressure. That would be the minimum, I expect. Early in the space program, piloting was the essential skill, but now, the mission of space travel goes beyond steering the craft, and even goes beyond the spirit of exploration: it is to discover what is needed for humans to live and work in space, and also to expand upon our fundamental science knowledge as it occurs in the outer space environment. I was most impressed to learn that NASA is specifically interested in recruiting biologists, which indicates another shift in the role of a scientist in space.

While the end of federal government supported shuttle program is bittersweet, I anticipate that in just a few short years, cooperation with the private sector will accelerate the opportunity for a good number of motivated people to travel into space. In fact, companies who are interested in space flight are competing with each other at this time, in a private space race of sorts. As we know, competition can spur innovation, and this could very well be of great benefit to future space travel. This sentiment was iterated by our hosts more than a few times. Not surprisingly, there will be an increasing emphasis on the drive to go into deep space, which will require more powerful rockets and people with the ingenuity, creativity, and good practices in science and engineering to make it happen. This has me excited about space travel once again. This was the fabulous view of the shuttle launch pad, only 3 miles away from us lucky tweeters. The sky was gray, but the poor weather expected held off and the shuttle was able to take off as scheduled at 11;26 am, just as scheduled. Shuttle launches have only a ten minute window to launch in order to rendezvous properly with the ISS. Photo: Joanne Manaster

Here, I’ve included my amateur video of the shuttle launch, which, despite a slight heart stopping few moments at 31 seconds where the countdown paused for a slight technical glitch, went off absolutely beautifully. My video camera is set on a tripod. I did not watch through the viewfinder. The video begins shortly after the spark plumes ignite any remaining hydrogen that may have leaked out of the engines, producing the white billow you see. We join the launch as the smoke and very bright flames of the solid rocket boosters blast and propel the shuttle upwards, followed very shortly by deafening rumbles. Finally, the vibrations of the lift-off propagate through the ground. This is manifested by the vibrations visibly shaking the camera at the end of the video. I love that you can hear my excitement and that of those around me. The sobs at the end come from a fellow tweetup attendee who had a poignant personal story of how important the shuttle program and space travel are to her.

To watch another amateur video that follows the shuttle through to the clouds, watch here.

Space travel is still as thrilling as when it began, even if it has become commonplace thanks to the shuttle program. I personally look forward to the ingenious ways scientists and engineers have yet to come up with to take us further into space in the future. Thanks to this tweetup experience offered by the folks at NASA, my imagination is captured once again, even if I am ten times as old as the little girl in the cotton dress in the desert of New Mexico, wondering about gravity on the moon.