Developing countries generally wait an average of 20 years between when a vaccine is licensed in industrialized countries and when it is available for their own populations. Economic, infrastructural and scientific hurdles all contribute to this long delay. The Global Alliance for Vaccines and Immunization (GAVI) is a partnership between many public and private organization, including UNICEF, WHO, the Bill and Melinda Gates Foundation, members of the vaccine industry and NGOs. GAVI was formed in 1999 to address the long delay between vaccine availability in industrialized countries and developing countries. Scientific advances that would help make more vaccines available in developing countries include the development of temperature stable vaccines, development of vaccines that required less than three doses to immunize and the development of needle free methods to administer vaccines. 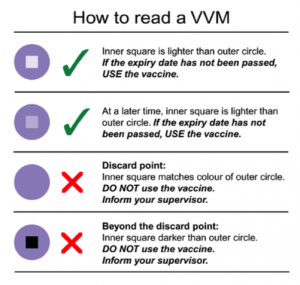 The “cold chain system” ensures that vaccines are kept cold from the time they leave the manufacturer all the way through to administration to the patient, but maintaining the cold chain is especially challenging in developing nations where lack of infrastructure can make it difficult to maintain proper storage temperatures. To this end, vaccine manufacturers engineered Vaccine Viral Monitors (VVMs) based on technology used in the food industry. Since March 1996, all polio vaccines through UNICEF carry VVMs, at minimal cost. As of January 2001, ALL of UNICEF’s vaccine supplies are required to have VVMs.

As most of us are “painfully” aware, many vaccines must be given by injection. In developing countries, healthcare workers may not have access to an adequate supply of sterile needles, and sometimes disposable syringes are saved and reused. This could lead to the spread of blood borne diseases. This is where bioengineering really shows its strength of creating solutions to problems. I could create a very long list of devices that have been created and are considered as innovative including nasal delivery, needle free, patches with dissolvable microneedles made of sugar embedded with the vaccine, and more. Check out what bioengineers have done for the field of vaccine administration!

For India specifically, I found this information related to vaccine production:  “Vaccine production by indigenous manufacturers needs to be encouraged to bring down costs, reduce dependence on imports and ensure availability of vaccines specifically needed by India (e.g. typhoid) and custom made to Indian requirements (rotavirus and pneumococcal vaccines). The recent vaccination related deaths signal a need for improving immunization safety and accountability and setting up of an adverse event monitoring system. Finally setting up a system for monitoring incidence of vaccine preventable diseases and conducting appropriate epidemiological studies is necessary to make evidence based decisions on incorporation of vaccines in the national schedule and study impact of vaccines on disease incidence, serotype replacement, epidemiologic shift, etc.” (source)

What Are Some Diseases That Do Not Have a Vaccine?

Malaria: Malaria is a protozoan parasite and while tiny it is still much larger than the bacteria or viruses that cause most other diseases.

According to “Professor Adrian Hill, … at the University of Oxford, whose group is working on malaria vaccines. “You can’t really use the whole malaria parasite to make a vaccine, but you still need to generate immunity to it. That means that we have to design a subunit vaccine, which is always difficult, and in this case the major problem is to induce a big enough immune response to kill the parasite.” (source)

Tuberculosis: There has been a TB vaccine for nearly 100 years, the BCG vaccine. It is not highly effective. There are several types of TB. Most of us think of the TB that affects the lungs but it can also affect bone, the bladder, and the gastrointestinal tract. The life cycle of Mycobacterium is complex and the disease can lay dormant and sequester itself in the human body for quite some time, making it difficult for the body to launch an immune attack even if it is given a boost with a vaccine. The vaccine works well in some populations but not others and is not effective in infants. Essentially the complexity of the disease and its manifestations is outfoxing our own knowledge of how to create a vaccine. You can read a story about the work on new vaccines here at NPR.

HIV: There are many reasons that a vaccine has proven so difficult to develop. HIV represents a unique challenge: our body can eliminate most acute viral infections. In contrast, our natural immune system does not destroy HIV. In fact, HIV infection results in the production of large amounts of virus, even in the presence of killer T cells and antibody. In developing a vaccine, we are faced with the challenge of trying to elicit an immune response that does not exist in nature. Therefore, we don’t know exactly what type of immune response a vaccine should develop. In addition, HIV virus mutates at a high rate and allows it to escape destruction by the immune system.

A note about Polio Eradication in India

Thankfully India has been declared Polio free for two years thanks to a very strong initiative, but there are still countries that struggle with its eradication.

Polio is a highly infectious disease caused by a virus. It invades the nervous system, and can cause total paralysis in a matter of hours. The virus enters the body through the mouth and multiplies in the intestine. Initial symptoms are fever, fatigue, headache, vomiting, stiffness in the neck and pain in the limbs. One in 200 infections leads to irreversible paralysis (usually in the legs). Among those paralyzed, 5% to 10% die when their breathing muscles become immobilized. Polio mainly affects children under five years of age.

Treatment: There is no cure for polio, it can only be prevented. Polio vaccine, given multiple times, can protect a child for life.

Books: A very popular book about Polio is not about it’s worldwide impact but its effect on America in Polio: An American Story

You may also check out Splendid Solution: Jonas Salk and the Conquest of Polio

Famous Scientists: Jonas Salk and Albert Sabin both made great strides towards the development of the polio vaccine. Their feud was famous as to whether a live of killed virus was the best way to inoculate against polio.

If we were able to eradicate smallpox and are on our way to eradicating polio, why can’t we do this with every disease?

We were able to eradicate smallpox because its virulence was specific to humans only. If enough people are vaccinated, there will not enough of a threshold level of hosts (us) to sustain the pathogen. Once vaccination strategies can be implemented more forcefully in areas that still have polio, it can be eradicated fully.

Diseases caused by organisms that live in the environment, like Clostridium tetani, which causes tetanus, could never be eradicated, even though we have an effective vaccine unless we were able to eliminate all Clostridium tetani from the planet. Not easily done.

Any disease that is zoonotic, meaning, can jump from animal to animal to human and back again will never be eradicated. If you want to learn about zoonotic diseases like Ebola, hantavirus, influenza and more, I HIGHLY recommend Spillover: Animal Infections and the Next Human Pandemic

A great educational site explaining vaccines in complete details is A History of Vaccines  by the College of Physicians in Philadelphia. It has games, interactive timelines, videos and more. I highly recommend this site!

The WHO maintains an excellent website related to vaccinations for most infectious diseases in developing countries here and definitely check out their massive Immunization Profile page for India.

Part 1: How vaccines are made and how they work.