Developing countries generally wait an average of 20 years between when a vaccine is licensed in industrialized countries and when it is available for their own populations. Economic, infrastructural and scientific hurdles all contribute to this long delay. The Global Alliance for Vaccines and Immunization (GAVI) is a partnership between many public and private organization, including UNICEF, WHO, the Bill and Melinda Gates Foundation, members of the vaccine industry and NGOs. GAVI was formed in 1999 to address the long delay between vaccine availability in industrialized countries and developing countries. Scientific advances that would help make more vaccines available in developing countries include the development of temperature stable vaccines, development of vaccines that required less than three doses to immunize and the development of needle free methods to administer vaccines.

END_OF_DOCUMENT_TOKEN_TO_BE_REPLACED 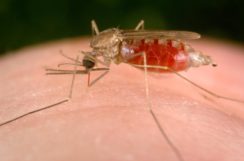 Other Pediatric Diseases in India (Malaria and HIV)

Image is of the Anopheles mosquito, the main insect vector of Plasmodium falciparum, the causative agent of Malraria via the CDC

This post is a continuation of Pediatric Diseases in India (part 4).

“Malaria is a mosquito-borne disease that affects more than 500 million people annually, causing between 1 and 3 million deaths. It is most common in tropical and subtropical climates and is found in 90 countries—but 90% of all cases are found in Sub-Saharan Africa. Most of its victims are children. The first stage consists of shaking and chills, the next stage involves high fever and severe headache, and in the final stage the infected person’s temperature drops and he or she sweats profusely. Infected people also often suffer from anemia, weakness, and a swelling of the spleen. Malaria was almost eradicated 30 years ago; now it is on the rise again.” (source)

END_OF_DOCUMENT_TOKEN_TO_BE_REPLACED

This is the first in a series of five posts leading up to my trip to India to examine issues of child survival with the International Reporting Project via Johns Hopkins University with significant funding from the Bill and Melinda Gates Foundation. For the duration of the trip, I am to consider my self a New Media Journalist with IRP.

Infectious diseases are common all over the world. You probably know them as generally communicable diseases of bacterial, viral or protozoan origin that will enter the body and infect it, causing illness and sometimes leading to death, especially if the body is weakened by malnutrition or stressful environmental factors.