This is the first in a series of five posts leading up to my trip to India to examine issues of child survival with the International Reporting Project via Johns Hopkins University with significant funding from the Bill and Melinda Gates Foundation. For the duration of the trip, I am to consider my self a New Media Journalist with IRP.

Infectious diseases are common all over the world. You probably know them as generally communicable diseases of bacterial, viral or protozoan origin that will enter the body and infect it, causing illness and sometimes leading to death, especially if the body is weakened by malnutrition or stressful environmental factors. 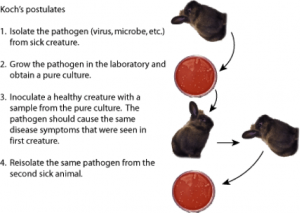 For a long time in history, doctors and healers could recognize symptoms of illness and would classify the illness and eventually name them, but they didn’t know what caused these illnesses. A big breakthrough in understanding that certain diseases were caused by extremely tiny organisms came through the work of Louis Pasteur and also Robert Koch. They both can be credited with establishing the Germ Theory of Disease. Koch applied rigorous scientific methods to understanding how microorganisms invade the host and cause disease. He determined what are known as Koch’s Postulates. The postulates are described in the diagram to the left.

This long post will talk about diseases common to children in India that have a causative agent and whose increased prevalence often has to do with issues of poverty, lack of education, unclean water, poor sanitation and malnutrition.

We will look at several diseases: diarrheal diseases (cholera, rotavirus), respiratory diseases (Pneumonia and Tuberculosis) and what I will just call “other” (Malaria, and HIV). Since Polio has been eradicated from India, I will address this in the vaccination post.

I will describe the disease, it’s causative agent, how it is contracted, they symptoms and most often the occurrence in the children of India if I have that information. This information comes from several sources including WHO, UNICEF, The Gates Foundation and more. Note that the numbers, percentages, and other analyses to help us understand the rates of infection or mortality are necessarily a critical part of knowing how severe a disease is in any given population and if prevention and treatment tactics are working. Working with the “M” of STEM, Mathematics, especially statistics, but also including GIS (global information systems) and other types of mathematical modeling helps us paint a picture of the severity of a disease now and determine our next course of action. If numbers excite you, you could be of assistance in the improvement of conditions in developing nations such as India by providing the data to decision makers in health policy, for instance.

The description will include a few of the more notable scientists who have played a role in helping us understand the disease, including Nobel Prize winners. If you feel I’ve left someone out, be certain to send a note via my contact page, I’d love to hear from you.

How a disease is treated or prevented will be touched on briefly. Note that tomorrow’s post is about vaccinations and since many of the diseases I will discuss have vaccines, I will address those in more detail in that post. Some diseases are just more common where sanitation is poor so their solutions will be examined in the post on sanitation.

Finally, I will suggest books for further reading on the topic if I know of them. These will be what I consider adult popular science books, which a bright middle schooler or high schooler could read as well. But if you are looking for something at a middle reading level, there are many fantastic books at your library and I highly recommend you check them out. (BTW, I LOVE LIBRAIRIES!)

Click on the links below to learn more about these diseases as presented in my above outline (cool books and videos included) at other Joanne Loves Science posts:

Other Diseases (malaria and HIV)

There are many more diseases that afflict children in India, but I believe this post is a decent treatment of many of them. Some of these will reappear as I post further topics over the next few days.

All images are creative commons sourced.

I offer huge thanks to the School of Integrative Biology at the University of Illinois for their support of my outreach. A huge dose of appreciation for GoPro cameras which has outfitted me with a new Hero3 with which I will share with you both the opulence and poverty of India in the upcoming days. This trip is fully funded by the International Reporting Project and the Gates Foundation.

Why am I going to India? Diarrheal Diseases in India (Cholera and Rotavirus)