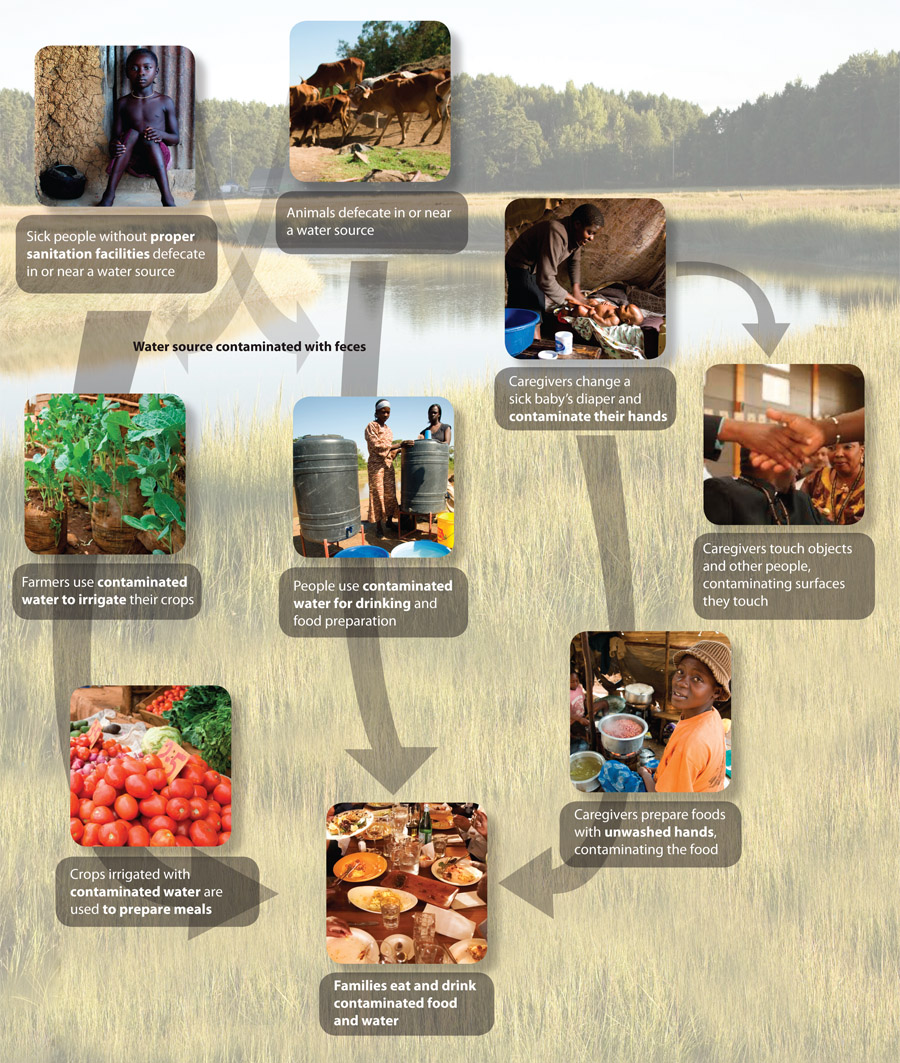 The image “Pathways to Diarrhea” comes from the CDC.

Diarrheal disease is the second leading cause of death in children under five years old. It is both preventable and treatable.

“Cholera is a disease spread mostly through contaminated drinking water and unsanitary conditions. It is endemic in the Indian subcontinent, Russia, and sub-Saharan Africa. It is an acute infection of the intestines with the bacterium Vibrio cholerae. Its main symptom is copious diarrhea. Between 5% and 10% of those infected with the disease will develop severe symptoms, which also include vomiting and leg cramps. In its severe form, cholera can cause death by dehydration. An estimated 200,000 cases are reported to WHO annually.” Learn more.

Best bet treatment: Most cases can be treated with rehydration salts. A vaccine exists but clean water and proper sanitation are the most effective measures to prevent the disease from taking hold in communities in the first place.

Book to read about Cholera: The Ghost Map: The Story of London’s Most Terrifying Epidemic–and How It Changed Science, Cities, and the Modern World by Steven B. Johnson.

Famous Scientists: John Snow, who discovered the source of the main cholera infection in England and whom The Ghost Map book is about, and Robert Koch who discovered that Vibrio cholerae was the infectious agent.

Rotavirus is the most common cause of viral gastroenteritis (inflammation of the stomach and intestines) worldwide. It kills more than 600,000 children each year, mostly in developing countries. Symptoms include vomiting, watery diarrhea, fever, and abdominal pain. In India,

“The health burden of rotavirus in India is well established. WHO estimated that 98, 621 Indian children died from rotavirus gastroenteritis in 2008, representing about one third of deaths from diarrhoeal disease and 4% of all child deaths in India. More recent data from the Million Death Study, a nationally representative survey of 1.1 million Indian households, estimated that the virus causes 113 000 deaths a year.” (source)

It was given its name because a scientist viewed it through an electron microscope, and thinking it looked like awheel, called it rota (think rotation) –virus.

Best bet treatment: Most cases can be treated with rehydration salts. A vaccine exists and is incredibly effective!

Book to read: I don’t know of a good one solely about rotavirus, but if you want to learn more about viruses of all types, including RNA based ones like rotavirus, definitely read Carl Zimmer’s book, A Planet of Viruses.