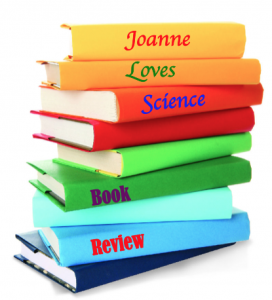 Shortly after I began my original incarnation of Joanne Loves Science, I acquired a video camera and wondered what I could do with it. I thought I’d attempt a video related to science. Not many people were making science videos in 2009, but the ones who did covered current topics or did experiments from their garages. I wanted to stand out and do something no one else was doing. I’m a big believer in the power of literacy as well as science literacy, so a book review was a natural choice. Thankfully back then viewers on YouTube were forgiving of homemade videos and didn’t expect high production values. I was able to create a good number of these reviews, learning more about editing and video production as I went along. Book reviews were a natural for me. I love to read and I love science!

In my search for others who love to read popular science books as much as I do, I found Jeff Shaumeyer, @scienticity on twitter, and his Science Book Challenge. Enthusiastically, I reached out to him to share our common interests. Our philosophies about reading, science, and outreach were quite compatible so a grand partnership began. Jeff agreed to help host a summer science reading “contest” for kids and teens with me called Kids Read Science and Teens Read Science oh, so

many years ago. We held that contest only one time (so far), but eventually came up with another fulfilling venture. As Google Hangouts on Air came available, I sensed it would be a great venue for us to chat with popular science book authors, which we began with the incomparable Mary Roach and have included some well known names such as astronaut Buzz Aldrin, naturalist and Pulitzer prize winning author, E.O. Wilson, astronaut and social media darling, Chris Hadfield, long time journalist Lynn Sherr, animal science and autism expert, Temple Grandin,  2014 non-fiction Pulitzer Prize winner Dan Fagin and more!

Check out a playlist of all 56 video book reviews done by Joanne!

Visit Read Science! at its home on Scienticity.net

Are you an author or publisher interested in promoting your science book on Read Science!?

Check out this reference page.

Joanne and Jeff teamed up with Scientific American (and their space writer Clara Moskowitz) to speak with Chris Hadfield. One of my favorite hangouts!