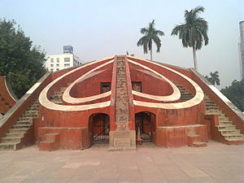 A Visit to an India Full of Science and Engineering

I am writing this to you from New Delhi, India as I am here with the International Reporting Project as a New Media Specialist! We have been in the crowded, bustling, port city of Mumbai, the central city of Nagpur (home of several tiger refuges), the rural village area of Gadchiroli, and finally to the modern city of New Delhi in order toexamine issues of child survival. I have several blog posts written in the run up to this project, with many more to come over the next month or so.

Did you know India has a National Science Day? National Science Day is celebrated in India on February 28 each year to mark the discovery of the Raman effect (the scattering of photons from an atom or molecule) by Indian physicist Sir Chandrasekhara Venkata Raman on February 28, 1928. He won the Nobel Prize in Physics for his work in 1930.
END_OF_DOCUMENT_TOKEN_TO_BE_REPLACED