The announcement of this interview originally was posted at Scientific American 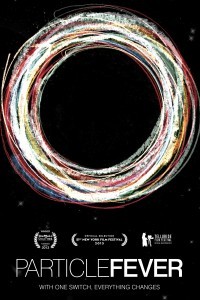 If you’ve seen the movie, Particle Fever (You haven’t? You can get it live streaming on iTunes today, and at other VOD services July 15), then you are acquainted with the ebullient American physicist Monica Dunford, an experimental high-energy particle physicist who helped bring the ATLAS detector at CERN into operation for the first Large Hadron Collider beam and collisions. Her areas of expertise range from searching for ‘new physics’ particles like dark matter to calibrating the ATLAS hadronic calorimeter to crawling in small, dusty places while connecting some of the 3000 kilometers of cable in ATLAS.

In case you missed Particle Fever (from another post at Scientific American):

The fantastic movie about the search for the Higgs Boson at the Large Hadron Collider, Particle Fever, which packed theaters on its tour across the country (I know, I sat in on one!) will soon be available to everyone on iTunes beginning July 1 and on other VOD services as of July 15.

“Imagine being able to watch as Edison turned on the first light bulb, or as Franklin received his first jolt of electricity.  For the first time, a film gives audiences a front row seat to a significant and inspiring scientific breakthrough as it happens. Particle Fever follows six brilliant scientists during the launch of the Large Hadron Collider, marking the start-up of the biggest and most expensive experiment in the history of the planet, pushing the edge of human innovation.  As they seek to unravel the mysteries of the universe, 10,000 scientists from over 100 countries joined forces in pursuit of a single goal: to recreate conditions that existed just moments after the Big Bang and find the Higgs boson, potentially explaining the origin of all matter. But our heroes confront an even bigger challenge: have we reached our limit in understanding why we exist?  Directed by Mark Levinson, a physicist turned filmmaker, from the inspiration and initiative of producer David Kaplan and masterfully edited by Walter Murch (Apocalypse Now, The English Patient, The Godfather trilogy), Particle Fever is a celebration of discovery, revealing the very human stories behind this epic machine.”

If you haven’t seen Particle Fever, it is definitely worth the time!