Joanne Loves Science is the home of articles and videos by Joanne Manaster, aka @sciencegoddess on twitter.

If you are interested in science around the world, read topics inspired by Joanne’s travels, including some that are space travel focused!

Scientific gummy bear destruction, the science of cats in sinks and science of make-up are early videos used to explain science.

Posts about science in TV, video and film, the topic of her former blog at Scientific American, will continue to be shared on this site.

As a science new media specialist active in outreach, Joanne can be found talking about social media and STEM issues for all. See what she has done and is doing next.

Are you an author or publisher interested in promoting your science book on “Read Science!”?  See this page.

The weekend of January 24th, I was in Chicago for a meeting of nerdy, geeky, and artistic minds at an invitation only event called ORDcamp held at the Google offices. It was great fun and I met some fantastic folks doing incredible things!
I threw several necklaces in my bag for the trip and when Saturday came, the two above were the narrow downed choices
You’re a nerd when these are your necklace choices for the day. 🙂
The stamped necklace comes from Kathy Branson at Cowdog Strong.
The image of Cassini and other space themed jewelry comes from Susanna Speier at her Etsy, MarsBling 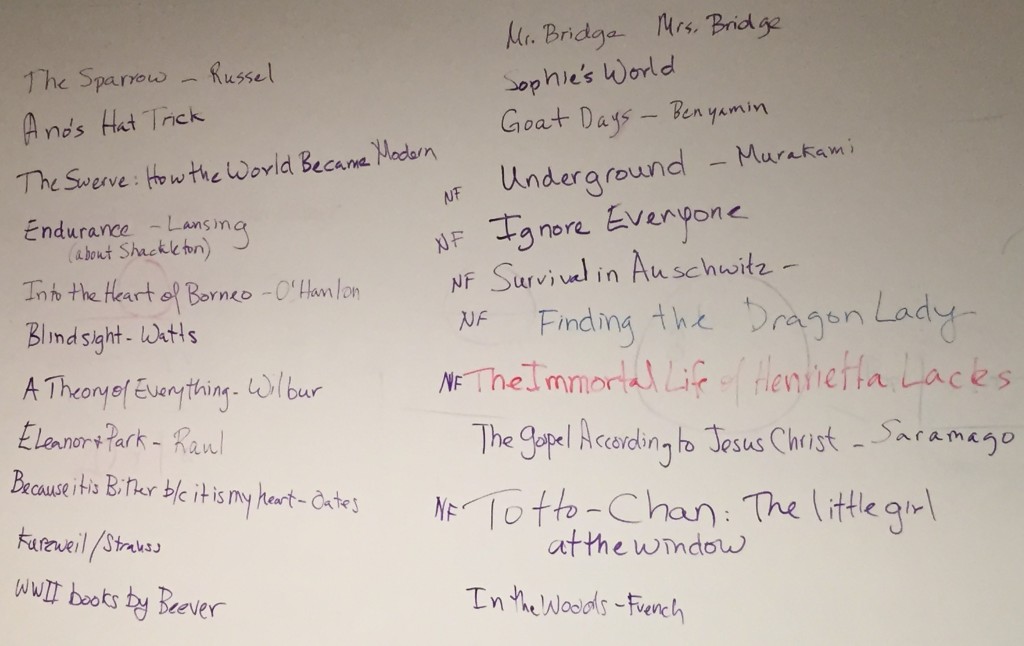 Apologies for misspellings on the board.
Has anyone else notice that with typing all the time and presenting in Powerpoint rather than using chalk or white boards, that your handwriting is deteriorating? I know mine is!
Here is our list of books this particular group enjoyed with no commentary:

Totto-Chan: The Little Girl at the Window

The Immortal Life of Henrietta Lacks

Finding the Dragon Lady: The Mystery of Vietnam’s Madame Nhu

Ignore Everybody: and 39 Other Keys to Creativity

The Gospel According to Jesus Christ (Harvest in Translation)

Sophie’s World: A Novel About the History of Philosophy (FSG Classics)

The Swerve: How the World Became Modern

Into the Heart of Borneo

A Theory of Everything: An Integral Vision for Business, Politics, Science, and Spirituality

The Singularity Is Near: When Humans Transcend Biology

I’ve added a few of these to my to-read or to-listen lists! Hope you find something here to enjoy, too!

Saturday, January 24 from noon to 4pm (in YOUR timezone) is time set aside to sit down and read for the National Read-a-thon Day as sponsored by the National Book Foundation whose mission is to expand the audience for literature in America.

At Read Science! Jeff and I want to encourage you to take some time to read a book of your choice that day in a show of support for literacy. You don’t have to read science, as any reading is great for the mind. However, if you want to read some science, you can certainly look to us to help you make some great choices. Connect with us on Facebook if you want to start a discussion about books!

END_OF_DOCUMENT_TOKEN_TO_BE_REPLACED

Engineering For You 2 Video Contest

Does the world of engineering excite you? Are you able to create an inspiring 1-2 minute video about one of the National Academy of Engineering’s Grand Challenges? If so, consider entering the Engineering For You 2 Video Contest for a chance to win $25,000!

END_OF_DOCUMENT_TOKEN_TO_BE_REPLACED

My Thoughts on The Imitation Game

I’ve been chomping at the bit for months to see The Imitation Game. It arrived in larger cities well before it appeared here in central Illinois, even being postponed further because the theaters bumped it to show The Interview. Theaters disappoint me with their skewed priorities!

You may have heard the buzz around this movie about British mathematician Alan Turing as played superbly by Benedict Cumberbatch, which is based on the book Alan Turing: The Enigma: The Book That Inspired the Film “The Imitation Game”

. As a piece of filmmaking, this movie is absolutely spectacular. The elements of the movie– the filming, directing, editing, acting, clothing, the music– all worked together to create a seamless film that engages you from start to finish. I highly recommend going to watch it! Sure, it has mathematicians and computers and no gratuitous sex or violence, but it won’t leave you bored, I promise. It is certain to win some of the awards at upcoming ceremonies.

My super short synopsis:  a group of mathematicians are recruited to break a code that the Germans were producing in World War II using their Enigma machine. The code would change daily which made figuring it out each day an impossible chore. Alan Turing wanted to build a machine that would be able to break the code faster, which he and his team ultimately did, resulting in the war shortening by about two years. The movie isn’t perfect, as I doubt very many historically base ones are. One of my favorite places to check up on movies is History vs. Hollywood, which does a level-headed analysis of comparing movies with the historical facts. They have analyzed the facts in The Imitation Game, so I won’t spend time nitpicking the movie in that regards here. There are also numerous articles about the perceived shortcomings of the film on the internet if that interests you, too.

Since I watch movies through my science worldview filter, let’s take a look at my very subjective sense of the film. I made a handy flask rating system for a quick tl;dr.

END_OF_DOCUMENT_TOKEN_TO_BE_REPLACED

The Fantastic Fur of Sea Otters

The latest in the series, Deep Look, takes a close up peek at the fur of sea otters and why it is so good at keeping them warm in cold water.

“Sea otters aren’t just cute — they’re a vivid example of life on the edge. Unlike whales and other ocean mammals, sea otters have no blubber. Yet their body temperatures are twice as warm as the water they swim in. The secret to their survival? A fur coat like none other.”

I wrote about this new series a few months back at Scientific American.

END_OF_DOCUMENT_TOKEN_TO_BE_REPLACED

I have attended a few NASA events, including the last shuttle launch and the launch of MAVEN. I visited Johnson Space Center in May 2013, tweeting images and thoughts from my visit. The image above was seen by Jennifer Welsh at Business Insider and included in a post, with my permission.

“Joanne Manaster, a biologist at the University of Illinois-Urbana, tweeted this image of the mission control room that runs the International Space Station.

In the picture, you can see a video link into the station, the video feed from an outer camera on the station, and the station’s route, which you can also find online. Look at all those screens — four each!

I also saw a retired Soyuz capsule, a mock up of the International Space Station used to train astronauts and some mock-ups of the new Orion capsule that will be our next vehicle to take humans back and forth to space, and with any luck, they will also go to Mars.

If you ever have an opportunity to go to a NASA Social, I highly recommend giving it a chance. It will help you look at our space program with a more informed eye, and every space news story will come alive in your mind.

The Liberal Arts that Scientists Know…

…is greater than the science known by liberal artists.”

This is a direct quote from Neil Degrasse Tyson in a talk given at the World Science Festival in 2010. (Video upload by Kristopher Hite) That quote starts at 4:39, but the entire video is worth watching.

Joe Hanson, who authors the It’s OK to be Smart blog, shared an article from The Washington Post titled, We’re way too obsessed with pushing science and math on our kids. The author claims that our insistence that we focus on STEM topics means we will forego other fields of study, particularly the liberal arts. Liberal arts and science are not mutually exclusive, in fact, many colleges and universities have Liberal Arts and Science designated schools.

END_OF_DOCUMENT_TOKEN_TO_BE_REPLACED

What my 23 Year Old Son is Reading

My son, Andy, is home from graduate school, where he is studying atmospheric sciences, specifically researching climate change issues. These are two of the books I see he brought to read (checked out from the library, no less): Broca’s Brain: Reflections on the Romance of Science

by Carl Sagan, and one that has me intrigued– Nothing Feels Good: Punk Rock, Teenagers, and Emo

. Over the years, he has played bass in several bands, including some that might be characterized as Emo, and others as some sort of  “death metal”, so a book looking at the phenomenon in teens about those musical influences doesn’t surprise me.

He is a big Carl Sagan fan, and I suppose I am to blame/thank. One night when he was 19 years old, he came to my room and said his friends had suggested he read some books by Carl Sagan and then asked if I had any. All I had to do was to reach over to my night stand and hand him Demon-Haunted World: Science as a Candle in the Dark

So inspired by that book was he that he recently acquired a tattoo with some very apt imagery: 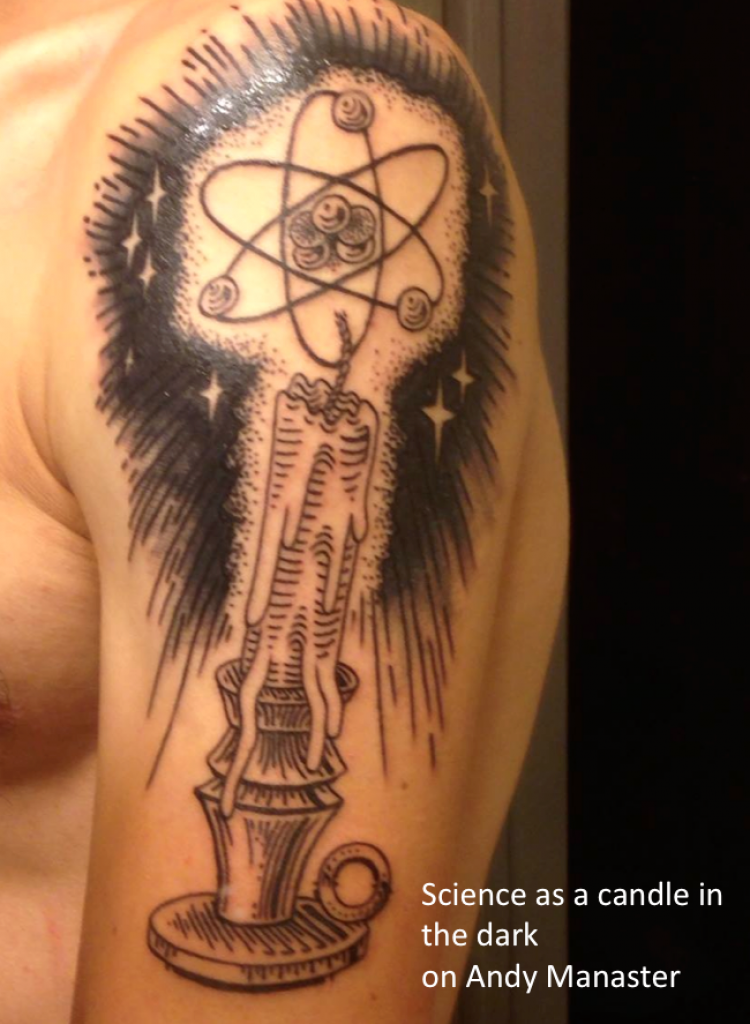 It’s an impressive piece of art on his arm there, even though I’m not a tattoo wearer myself. I mean, if you have to have a tattoo that reflects who you are at your core, then I’m really pleased that this is who my son has become.

The Sun’s Rays and Skin Damage

What you see here is a screenshot from a short embedded tutorial that demonstrates the depths to which the different wavelengths of light penetrate the skin. It is a part of L’Oreal’s Skin Science page, a very extensive resource that will help you learn much about your skin and the science L’Oreal does for R&D of their products.

To view this tutorial, you will need to go to this page and click on the image. A pop-up will appear that will slowly demonstrate wavelength penetrating the skin. Helpful information to keep your skin safe and young looking for years to come.

END_OF_DOCUMENT_TOKEN_TO_BE_REPLACED

If you like Joanne Loves Science, you can thank Alan Alda

If you have the time, watch Alan Alda (of MASH fame) talk about his role on Scientific American Frontiers, a science TV show that ran from 1993-2007. (BTW, the audiobook version of Never Have Your Dog Stuffed: And Other Things I’ve Learned

In a way, we have Alan to thank for the inception of my website/blog ‘Joanne Loves Science’ and my foray into social media.

Several years ago, as I was standing in front of a section of my “Cell Culture and Concepts of Tissue Engineering” lab class at the University of Illinois, I introduced a video segment from Scientific American Frontiers with Alan Alda. In this program, Mr. Alda traveled to numerous laboratories across the world to inquire about their research, bringing the audience along with him. He figured if the scientists could make their research understandable to him, then the general public would understand it, too!

To my surprise, the sentence “He’s doing my dream job!” tumbled out of my mouth.